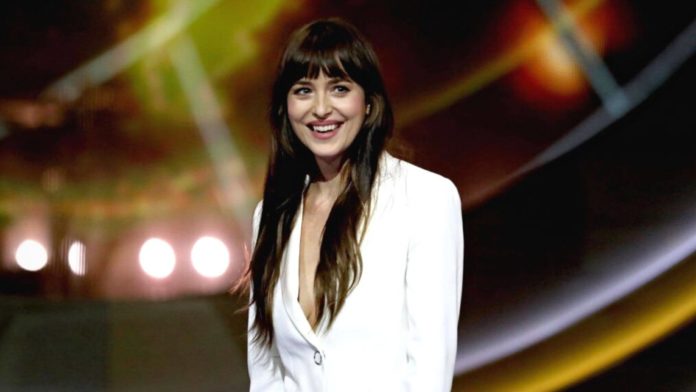 Celebrities really do the most uncanny kinds of stuff. They just can’t really stop making controversies. Moreover, that’s the reason why they are famous.

Just this week Cameron Diaz revealed she never washes her face. Dakota Johnson is trending now revealing crashing at weddings and getting caught up. She said it is one of her number one hobbies.

The Fifty Shades Of Grey star was with Andrew Garfield, Jodie Comer, and Jennifer Hudson during a game in W Magazine’s Never Have I Ever franchise.

“It’s One Of My Number One Hobbies,” Dakota Johnson’s Hilarious Reply When Asked If She Ever Surprised A Fan On Their Wedding Day

The actress was asked if she has ever surprised a fan at their wedding. She quickly replied, “I feel like I’ve done that a lot, It’s one of my number one hobbies.” She also shared one of her embarrassing moments when she showed up surprising a fan on their big day and things didn’t quite go as planned.

“There I was, holding up the bride and groom in a chair. And they were like ‘Who – What are you doing?” she added.

The Lost Daughter actress is frequently linked with singer Chris Martin ever since their dating rumors spread in 2017. The couple was spotted together on a number of occasions since then.

The actress was seen at Coldplay concerts a lot where the rumors started. In 2018, the pair was seen holding hands at Autumn/Winter collections, SIR Studios. They also share matching infinity tattoos.

In March 2022 the couple moved to a $12.5 million mansion in Malibu, California. “We’ve been together for quite a while and we go out sometimes, but we both work so much that it’s nice to be at home and be cozy and private.

Most of the partying takes place inside my house,” the Fifty Shades Of Grey actress revealed in her relationship with Chris Martin.

Recently, Matt Sazama and Burk Sharpless finished the script for the Spiderman universe’s Madame Web. S.J. Clarkson is set to direct the film. The team is rumored to cast Dakota Johnson as the lead in the movie.

The actress is enjoying the best time of her life dating Chris Martin and is at the peak of her acting career. Her performance in Fifty Shades Of Grey landed her with a number of projects, recent ones being The Lost Daughter and Am I Ok? A Spider-Man spin-off may be added to her spin of work as the rumors intensify.