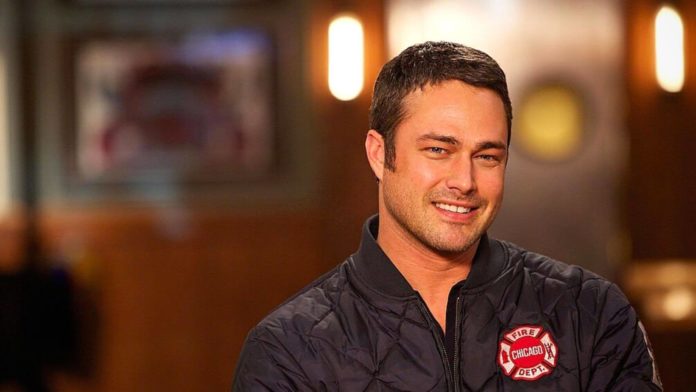 How many of you knew that Laga Gaga was engaged to Taylor Kinney and is the same Kinney who is an actor and model who starred in the NBC series Chicago Fire?

If you are a Little Monster, this might not be new information for you as you are aware of everything and everyone in Gaga’s life but for others, Lady Gaga was engaged to Taylor Kinner for over a year.

So you must be having alot of questions about Taylor Kinney now like why happened between Lady Gaga and Taylor Kinner, Who is he dating now, and who he has dated before?

Well, this article is the answer to your all questions as well will take you through the dating history of Taylor Kinney.

Who did Taylor Kinney date before Lady Gaga?

Taylor Kinney entered the entertainment industry in 2006 and he first appeared in the series Fashion House in the main role. After being active in the industry and doing many major projects, Taylor Kinney started dating real estate agent  Brittany Buckett in 2010. The couple broke up in 2011.

Later after their breakup, Brittany has revealed that it was Taylor who initiated the breakup and he cheated on her with Lady Gaga. Brittany Buckett has said that Taylor has said that Gaga and he are just good friends but one day, he called her at midnight and told her that he has cheated on her. The breakup was devastating for Brittany Buckett but she has moved on from Taylor.

Lady Gaga and Taylor Kinney started dating officially after Kinney broke up with Britanny. But there is a rumor that the two have been close with each other even when Taylor was dating Britanny.

Taylor Kinney and Lady Gaga met in 2011 when the two were on the sets of Gaga’s song You and I. The two made their relationship official within a few months of dating and in 2013, Gaga told about how loving and supportive Taylor is to her as a boyfriend. In 2015, on valentine’s day, Taylor Kinney proposed to Lady Gaga and the couple got engaged.

But the couple stated that they are no longer together in 2016 as things didn’t work out well between them. Taylor Kinney’s ex Britanny Buckett came into the scene when Taylor and Gaga broke up and stated that Taylor might also have cheated on Lady Gaga too just like how he cheated on her.

Who is Taylor Kinney dating now?

After his break up with Lady Gaga, Taylor Kinney was never seen officially dating a woman. He was rumored to be dating his co-star Miranda Rae Mayo but both Kinney and Mayo denied the rumors.

Recently, Taylor Kinney is linked with a woman named Ashley. The speculation of Taylor dating Ashley started when he posted a photo of her getting her manicure done in a salon.

There is not much information on Ashley and about her relationship with Taylor Kinney. Taylor Kinney posted the photo of Ashley on his official Instagram on March 4 and we can expect that the actor will be posting more photos of him with his new girlfriend soon.