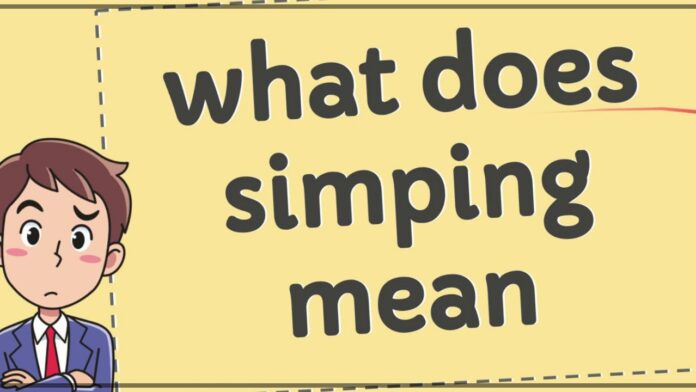 After scrolling through the Instagram or TikTok comments of a Gen-Zer as of late, you may have come across some similar phrases:

“CEO of simping”; “Simp Nation;” and “I might have to simp,” among others.

You’ve also probably seen a few references to popular culture in their posts with one rumored Star Wars reference about kids who are “simpin.”

What is the deal with all this “simping” stuff? I have friends in their early twenties who are also hella confused about it, and even myself. It could be because no one really knows what the heck it means. Even those TikTokkers can’t agree:

The word “simping” has been popping up more often lately on social media platforms like Twitter or Instagram-often as a hashtag that accompanies videos of men performing exaggerated facial expressions to reflect sadness or heartbreak for comedic effect, but its origins remain unclear to many users online.

What is simping, and what is a simp? Simping is an action that can be done in many different ways. It can also be used as a verb or noun to describe the person who does it. What does “simping” mean? The definition of “simping” varies depending on your intent with the act. For some people, it may just mean trying to get something for free by asking too many times or being manipulative in other ways; while others use it more generally to refer to any form of begging. No matter which way you decide to use this word, there are plenty of reasons not to do so!

Another day of simping over Taylor Hickson, I see. This woman is even real? Her beauty is ethereal ???????? pic.twitter.com/gyAPNNYBKi

What is simping, and what is a “simp”?

– Almost all of the time, when people use this term it’s in a negative way. Those who are on the other end can feel manipulated and used for their generosity or pity. This is not something we want to do with our friends or family members!

– When you get too many requests from someone, they’re likely going to be less willing to help out. They may even flat out refuse because they’ve been “simped” enough already. Even if there wasn’t an explicit rejection, just think about how much more difficult that makes life for them down the line!

– It will also negatively affect your reputation around town in general; which isn’t something any good citizen wants happening at all costs.

Where did the word ‘simp’ come from?

You might be surprised to know that simping is almost 100 years old. For example, the New York Times reported that the term was first used in its pages in 1923.

Back then, the word meant a simpleton and it could even be considered an insult when directed at someone; however this meaning transformed over time with help from hip-hop music artists like Too Short who were using “simp” all the way back in 1985 according to The NYTimes!

Today “simp” still means pretty much what it did before but now can also imply admiration for another person’s style or power which has led some people (especially women) use it as self identification too because of how powerful they feel after identifying themselves as such.

The word “simp” originated from the 1800’s and was used to insult someone who is eager for their romantic interest. One of the most popular instances of this phrase being used as an insult can be found in UGK’s 2001 track, “Blessed Be The Game (Here Comes) .

Paak sings about not wanting a relationship where he would have to simp on his latest 2015 song Suede: “Look me in my eye there’ll be no simping.”

How did ‘simp’ become a major slang term on TikTok?

Fast forward a few more years, and the idea of being “simp” is everywhere. As with almost any trend in 2020, TikTok had a lot to do with that.

So, for more interesting news checkout the TheNUHerald.