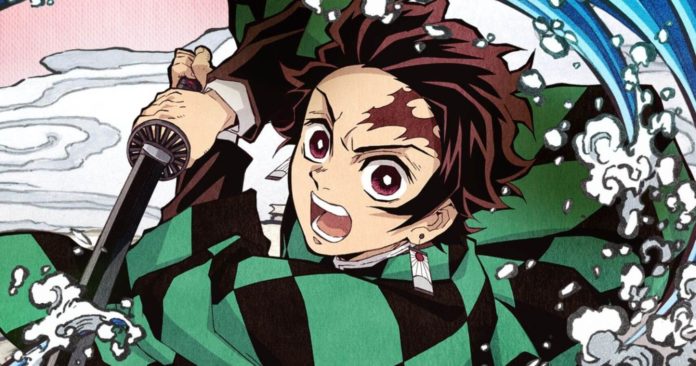 Demon Slayer ( Tanjiro Kamado – Kimetsu no Yaiba) is a Japanese manga series written and illustrated by Koyaharu Gotunge. The series slots in the genre of adventure/fiction and were published in Shueisha Shonen manga magazine weekly from February 2016 to May 2020 with its chapter collected in 23 tankobon volumes.

Tanjiro – The World Summoned Of Demons

The series was acclaimed by both critics and the audience alike. Demon Slayer is a revenge saga of Tanjiro Kamado, a teenager who gets metamorphosed into a demon slayer to avenge the murder of his family. It accounts for the world summoned of demons and demon slayers and the crux of the story is narrated along with the lives of Tanjiro Kamado and his sister Nezuko.

The story takes place in the mountains known to the world as Taisho-era in Japan.  Tanjiro Kamado was a wise and brave lad who lives along with his family in the mountains. Havoc unleashes when Tanjiro confronts the massacre of his family by a demon which only the two siblings alive. But the two soul survivors lost their selves as Tanjiro became a Demon slayer and Nezuko became possessed of demons, but still behaves through human emotions and thoughts.

The demons were formed as the humans sold their humanity and faith in the power exchange. Demons feed on humans with enhanced supernatural abilities such as super strength, magical powers and the ability to regenerate. Demons can only be demolished if they are cut with weapons moulded with an alloy in the name of sun steel, which is dipped in the poison transmuted from flowers or exposed to sunlight. On the contrary, the demon slayers have an adroit human form. They adopt a special breathing technique often referred to as “breathing style” which empowers them super strength and vitality. The story follows how Tanjiro Kamads becomes the Demon slayer and finally conquers the demon king for the rise of humanity.

The series received raving reviews from both critics and the audience alike. Demon Slayer was also published in English by Viz Media and simultaneously published by Shueisha on their manga plus platform.

When Tanjiro Kamado comes across Gujū, a demon slayer he was recruited and sent as the disciple of Sakonji Urokoduki, an official of the demon slayer corps helps Tanjiro embrace the warrior spirit and mould him into a valorous Demon slayer.

Later achieving the heroic status and marrying his love interest Kanao Tsyuri, he goes against all odds and oath to the demolition of the demon reign. Defeating one by one he soon confronts Muzan, the demon king. In the final battle which was brutal and lasted long, Tanjiro finally kills the demon king, but later Tanjiro collapses in the battleground and leaves the soul from the body, after suffering the battle scars from Muzan, but only to be reborn again.

Why Was Tanjiro Kamado Killed?

Nezuko gets untied from the demon possessions and after the death of Muzan, the storyline of the series pretexts the readers that the demon slayers have attained glory. But the expectations were in vain.

Chapter 201 of the series tested the will and it opened with a shocker. It presents Tanjiro Kamada in a brutal state after a fierce battle with the Muzan. The injuries made him weak and bedridden as the condition left him on the brink of death.

Is Tanjiro The New Demon King?

Tanjiro becomes the new demon king when Muzan enters into his body. But the spell was soon reversed as the result of Nezuka’s calling and Tamaya’s medicine which has the prowess to remove all the demonic possessions from Tanjiro’s body. Tanjiro fights against Muzan in a power struggle to attain his own body.

Tanjiro’s death tested the audience’s patience as they lost all their hope following the unexpected storyline.  But chapter 204 saw the renaissance of Tanjiro Kamado as Nezuko his sister provokes to uplift the human conscience within Tanjiro and it results in his transformation to a human form.

Nezuko tries to overpower the consciousness of Muzan within Tanjiro by hugging him and by referring to him as ‘Onii-chan’ to evoke a feeling of familiarity and affection thereby lifting the humanity within him.  Along with it Kanao, Tanjiro’s wife injects medicine into him that has the efficacy to prevent his transformation into a demon or it slows down his physical transformation that is caused by the consciousness of Muzan.

The medicine was created by Shinobu which was originally meant for Nezuko to reverse her demonic possessions.  One day Tanjiro accidentally hurts Kanoa and it affects him in regaining a little sort of self-control over his consciousness.  This boosts the medicine to promote its further work of removing the demonic possessions.

The consciousness of Muzan parasite in Tanjiro tries to provoke him to stop the healing process by saying that the people around him started hating him and even his sister and love interest considers him as a nemesis. But Tanjiro never haves any second thoughts for these provocations and he directly rejects his motive to it. Slowly, propped by the hands of Hashira and with the help of the loved ones including friends and family, Tanjiro attains into the human state and buries Muzan forever.

Later the storyline witnessess a sudden shift in the timeline from present to future. The time phase showcases the lives of the Successors of Tanjiro having a peaceful and abundant life, which directs the readers to the disappearance of the demolitions of the demons forever.