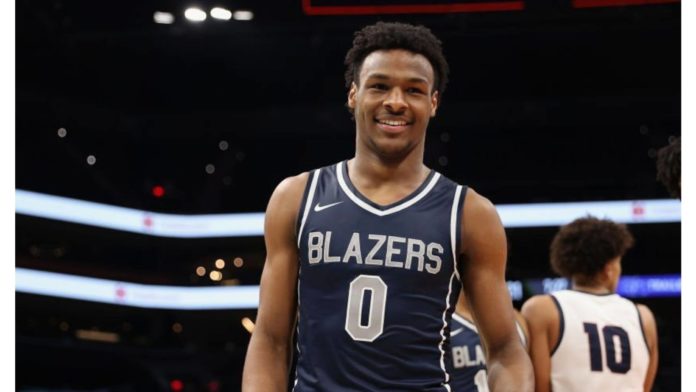 Bronny James’s rumored girlfriend is Peyton Gulfuso who has been spotted at many games of Bronny James and were seen together going for dates. The troll began shortly after Bronny James posted the photos on his Instagram.

The troll started off critiques claiming Bronny James as “Just Like His Daddy” referring to LeBron James who has been rumored to have an affair with a white woman.

Some of the critiques reacted to the Instagram post by saying, “ Like father like son LMAO, I can 100% guarantee LeBron approves”. Another critique remarked, “How can you be raised by a woman as beautiful and black as Savannah and not want a black woman? Ugh. I would be so disappointed”.

Some people came forward to defend Bronny James and have said, “ it’s upset to see black women under here upset about a child’s decision on who he dates”.

LeBron James who has been married to his girlfriend and Savvanah has been romantically linked to a white woman named, Sofia Jamora and this is what triggered the troll after Bronny James posted photos with his white girlfriend.

His godfather is Chris Paul, who is also a professional basketball player. Bronny James has two siblings, Bryce Maximus James, and Zhuri Nova James. His zodiac sign is Libra and Bronny James and is of mixed ethnicity.

Bronny James was into basketball at a very early age itself and he also played soccer. His first official match was at the age of nine in Amateur Athletic Union in which he appeared for the Miami City Ballers.

James’s first jersey number was zero which he preferred as an inspiration of the NBA player Russel Westbrook and later changed it into 23, the same number of his father, LeBron James. In 2015, Bronny James led the Gulf Coast Blue Chips AAU team to a fourth-grade championship at the League Dallas.

In the next year, Bronny James joined the AAU team, Strive for Greatness, and was appeared in the Nike Elite Youth Basketball League held in Indianapolis. Bronny James was admitted to Crossroads School in Santa Monica in 2018 and was later transferred to Sierra Canyon School, a private K-12 school in Los Angeles in 2019.

Bronny James made his high school debut in November 2019 and had won over Montgomery High School by scoring 10 points off the bench in the blowout. In December, Bronny James scored 15 points and was given the title of Most Valuable Player.

As a freshman, Bronny James has become Sierra’s first player to appear in 34 games of the season. In his sophomore season, James wasn’t able to actively appear in most of the games as he tore his meniscus and had undergone surgery to fix it.

Bronny James’ list of interested schools are Kentucky, North Carolina, Duke, Kansas, and UCLA. Among the five schools, only Kentucky has made a scholarship offer to Bronny James.

Bronny James is currently dating Peyton Gulfuso and the news of James dating Gulfuso became viral after a video of the couple together circulated on social media platforms.

Bronny James and Peyton Gulfuso were seen going on dates and Gulfuso has also attended many games of Bronny James. Before Peyton Gulfuso, Bronny James was rumored to be dating Amara Wayans, daughter of actor Damon Wayans Jr who is a social media influencer and model.