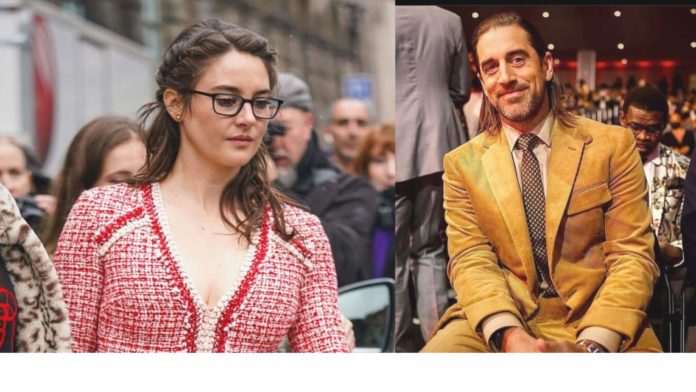 It’s Over Between Aaron Rodgers And Shailene Woodley – The Couples Has Called Of Their Engagement After Less Than 2 Years. Some authentic sources that are close to Aaron Rodgers confirm that the NFL star, Aaron Rodger, and the actress Shailene Woodley are done with their relationship just over one year after Rodger announced his engagement with Shailene in his acceptance speech.

The sources reported, “It was an amicable split; it just wasn’t working. They are very different people with busy careers and there were obstacles that they couldn’t surmount. They will remain friendly: there’s no bad blood and no drama. It just didn’t work out for them”.

The sources have also reported the reason behind their breakup. They said that “While Shailene is supportive of Aaron’s career, he put football first and they were barely spending any time together. She felt he neglected their relationship, neither of them was happy”.

In September 2021, in an interview, Aaron Rodger said that “I didn’t see a temporary long-distance relation as a bad thing. My focus could be in Wisconsin playing for the Green Bay Packers while Shailene Woodley is living in Los Angeles working on numerous projects.

It’s a busy work time for her, so probably came at a good time for both of us to be able to focus on our work. I think it’s going to be a good thing. I mean, her work was shut down for an entire year, and she’s booked a number of projects. She enjoys working and her own routine, which I obviously enjoy, too”.

Celebrity stars, Aaron Rodgers and Shailene Woodley started dating in July 2020 and it became public after Shailene Woodley confirmed her relationship to Rodgers on The Tonight Show in February 2021.

After confirming their relationship, Shailene Woodley said, “For us, it’s not new news, you know? So it’s kind of funny. Everybody right now is freaking out over it and we’re like, Yeah, we’ve been engaged for a while”.

Aaron Rodgers is an American football quarterback who was born on December 2, 1983, in California to Darla Leigh and Edward Wesley Rodgers.

He was a quarterback at Pleasant Valley High School in Chico and played a year at Butte College and then transferred to the University of California in 2003. Aaron Rodger led the NFL in 2012 and won the division title.

Shailene Woodley is an American actress who was born on November 15, 1991, in San Bernardino, California to Lonnie Woodley and Lori. She started her career as a model at the age of four and even did minor television roles.

She became popular after starring in the role of a teenage cancer patient in the drama, The Fault in Our Stars. In 2011, she has made her film debut in The Descendants, in which she got many positive feedbacks from legends.