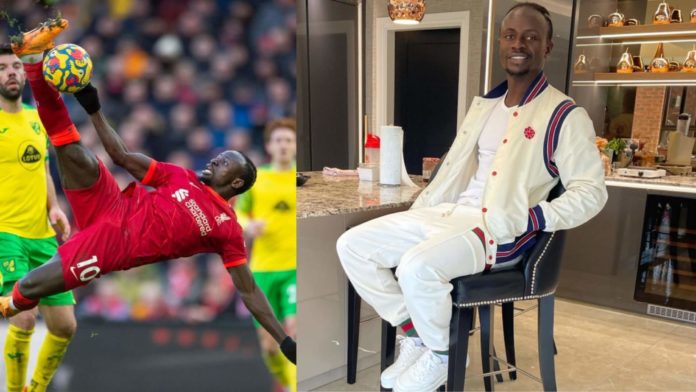 Sadio Mane is the left-winger of the Liverpool club and is best known for his goals and assists, and is also a lethal threat to the opposite team.

Sadio Mane who came from a family and village where football is something they didn’t even dream of has become one of the best football players in the world.

Presently, many clubs are eyeing Sadio Mane for transfer including Real Madrid and Barcelona. Discover more about Sadio Mane and his personal life in this article.

Sadio Mane grew up in the village of Bambali and was from a financially weak family. Because of this Sadio Mane couldn’t get proper education and wasn’t able to attend school. Mane had a passion for football at a very early age and despite his unfavorable situations, Mane wanted to become a professional football player.

It was in 2002, Mane became serious about his passion for football when the Senegalese national football team reached the three-quarter finals of the Worldcup tournament. Mane trained himself and developed his skills and abilities. His villagers were very supportive of his interest in passion but it was not the same case with his family.

Sadio Mane’s family forbade him to make football his career and wanted him to become a teacher. But this didn’t stop Mane from pursuing his career. Mane’s village is a remote place where they weren’t any opportunities to grow in football, so he moved to Dakar, the country’s capital at age of 15 to pursue his football career.

Mane’s family couldn’t afford Mane’s move and travel, so they sell their crops to raise money for his expenses. Also many villagers, some Mane didn’t even know also helped them financially.

At Dakar, Mane struggled to meet his expenses but all the while, he also went to many football trials and this was the first step to his journey towards success.

After moving to Dakar, Sadio Mane attended the football trails of many clubs and at that time Mane didn’t have proper shoes or dress to wear to the trails. When playing at Dakar, Mane was noticed by scouts who then referred Mane to Generation Foot because of his skill in the game.

In 2011, Generation Foot referred Mane to Metz and he joined the French football club. This was Mane’s door to a bigger football world. Mane made his debut in Metz on

14 January 2012 as a substitute for Kevin Diaz in the match against Bastia in Ligue 2. At Metz, Made about 19 appearances in the first season, and among them, 12 appearances were as a starter.

In August 2014, Sadio Mane was transferred from Red Bull Salzburg to Southampton for 11.8 million pounds, signing a four-year contract. Mane made his debut at Southampton in the League Cup and scored his first goal for the club on 18 October against Sunderland. Mane was an active player of Southampton in the period of 2014-2015 season and 2015-2016 season. Mane scored over 10 goals for Southampton during his time in the Club.

Sadio Mane joined the famous English club, Liverpool on 18 June 2016 for a transfer fee of 34 million euros and this made him the most expensive African player of all time. Sadio Mane signed a five-year contract with Liverpool. Sadio Mane made his Premier League representing Liverpool and scored his first goal for the club in his debut match.

In the first season itself, Mane has received the title of Liverpool Player of the Season on 9 May 2017. In the 2017-2018 season, Mane was named the Premier League player of the month after scoring goals in Liverpool’s three matches in the month of August. Mane scored his first hat-trick for Liverpool on 14 February 2018 in a match against Porto.

In April, Mane was nominated for the title of PFA’s player of the season after an impressive performance in the season and was also awarded the Premier League Golden Boot which he shared with teammate Mohammed Salah.

In 2019 Sadio Mane helped his club Liverpool to win the Champions League finals. In the 2019-2020 season, Mane was shortlisted for Ballon d’Or and also made his 100th premier league appearance in the season.

As of 2021, Sadio Mane has a net worth of over 25 million euros and has a salary of 6.5 million euros. Sadio Mane, who came from a financially weak family built all his wealth through football.

Sadio Mane is a very charitable person who didn’t forget about his family and hometown after he got fame and helped his villagers in many ways. He also reconstructed the mosque that his father was Imam of.

He also built a school in his village and also helped them at the time of the pandemic. Sadio Mane is also leading a humble and modest lifestyle

Sadio Mane is a devout Muslim who prays 5 times a day. Sadio Mane has been seen praying and thanking God on multiple occasions while playing for his team.

Sadio Mane stands at a height of 5 feet 9 inches and weighs about 76kgs. His hair color is black and his eyes are dark brown.