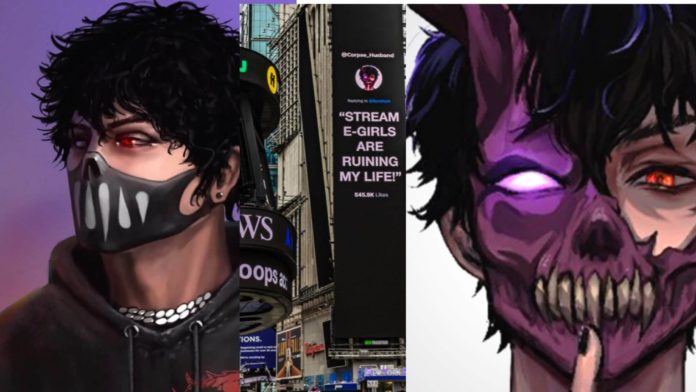 Do you have any doubt about Corpse Husband’s sexuality?? Many people have been creating several rumors about the “faceless” YouTuber. The American Internet personality Corpse Husband is well known for his horror stories on YouTube.

He has been narrating horror stories since 2015 and has more than 7.61 followers on Youtube for his scary stories in a low-pitched voice. The corpse is chronically ill with the disorder named GERD which leads to his sound much deeper.

He is also well known for his music and gaming. It was in 2020 he began playing mysterious games with other YouTubers.

Many people doubt whether Corpse is gay as he always points out other attractive men. Some of his comments about men lead to the thought that he is gay.

Recently he explained on Instagram, “People think I’m not (straight) because I am not afraid to say when another guy is attractive. To me, it’s really funny when hypermasculine guys are too insecure to even verbalize that they recognize that another man is remotely attractive”.

Although he is not gay, he always stands for the LGBTQ+ community which leads him to have a huge fan following. In October 2020, Corpse used the word “dyke” in his narration which led him into several controversies. Later he apologized through a Twitter post. He wrote, “I wanted to show the struggles of what trans people go through. And I support trans people.

In the video, I read the word out loud, and I realize now that I shouldn’t have done that. I didn’t realize the severity of the world or I obviously wouldn’t have said it.” After posting these words, Corpse was overwhelmed by the positive response from the LGBTQ+ community. This huge fan following of the LGBTQ+ also leads several people to think that Corpse Husband is gay.

Besides, Corpse and fellow gamer Sykunno flirt online and the fans have named Corpsekunno for the duo’s ship. Many people take it as a funny matter while a few gamers explained the seriousness of this situation.

There were many situations where the fans doubted his sexuality. However, it was explained by himself as he is not gay and he is strongly supporting the LGBTQ+ community too.