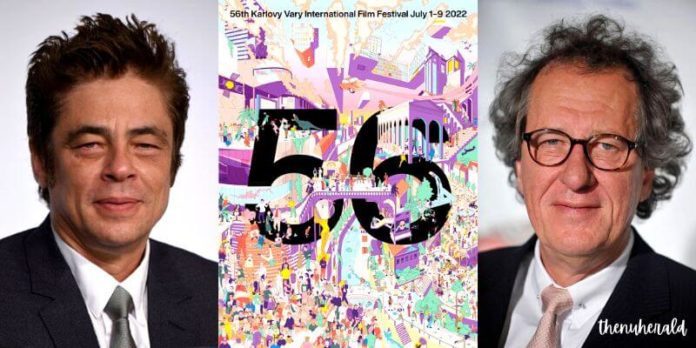 The actors Benicio del Toro and Geoffrey Rush will be honored for their acting careers at the 56th annual Karlovy Vary International Film Festival (KVIFF), which runs from July 1-9 in the scenic spa town of the Czech Republic.

A Crystal Globe for Outstanding Artistic Achievement in World Cinema will be awarded to Australian actor Rush at this year’s Cannes Film Festival.

At The Karlovy Vary Film Festival, Geoffrey Rush And Benicio Del Toro Will Be Honored!!!

Quills and Shine, Rush’s Oscar- and Golden Globe-nominated performance in The King’s Speech, will premiere during the festival as a tribute to the actor.

The KVIFF President’s Award honors actors, directors, and producers who have made significant contributions to the advancement of film and cinema. Del Toro will receive this award.

Additionally, Del Toro’s 1995 international breakout picture The Usual Suspects and 2001’s Oscar-winning feature Traffic will be shown as part of the celebration.

Rush’s performance as Lionel Logue, King George’s speech therapist, in the 2010 movie “The King’s Speech” got him Oscar and Golden Globe nods, as well as a BAFTA Award for Best Actor. Australian Academy of Cinema and Television Arts was founded in 2011 by Rush, who was elected Australian of the Year in 2012 for his contributions to Australian culture.

“Traffic” (2000) garnered him an Oscar for best supporting actor, a Golden Globe, a BAFTA, and a Silver Bear at the Berlinale for his depiction of a corrupt cop in Soderbergh. He worked with Guy Ritchie on the gangster comedy “Snatch” (2000), Sean Penn on the thriller “The Pledge” (2001), and Alejandro González Iárritu on the crime drama “21 Grams” (2003), which earned him his second Oscar nomination and the Venice Film Festival’s Audience Award.

“Sicario” and “Sicario: Day of the Soldado” were both directed by Stefano Sollima in 2015, and he repeated his role as Alejandro in the latter (2018). The Netflix murder thriller “Reptile,” in which Del Toro co-stars with Justin Timberlake, will be Del Toro’s next project.

The honors for Rush and Del Toro will be presented on the night of the closing ceremony.

“We are honored and delighted that two extraordinary actors we have been deeply admiring for many years accepted our invitation to come to Karlovy Vary,” KVIFF president Ji Bartok said.