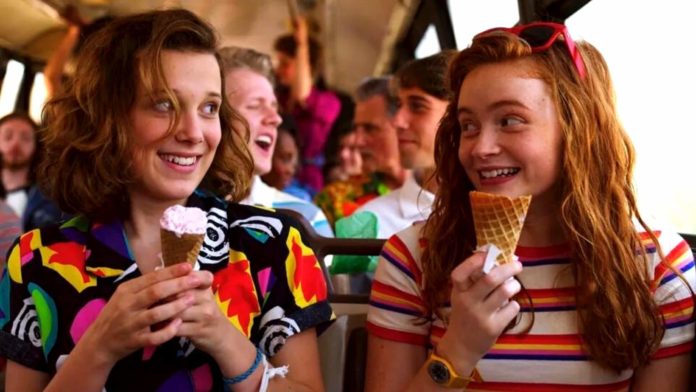 The Stranger things season 4 star Sadie Sink revealed that she misses the sweet friendship between Max and Eleven. She also thinks that Max could have used her support.

Actress Sadie Sink who plays the role of Max in the Science fiction horror drama television series Stranger Things 4, said that she misses the friendship which was between her character and Millie Bobby Brown’s character Eleven. Sadie Sink joined the sci-fi horror series in season 2 where she played the role of the Mysterious new girl Max Mayfield.

Max became a core member of the Hawkins family in the series after she joined the ranks of Mille, Dustin, Lucas, Will, and El. Apart from the stranger things, Sadie Sink has also appeared in the Netflix horror anthology Fear Street as well as in the recent Taylor Swift video, All Too Well.

Speaking about Max’s friendship with Eleven the actress openly said that she thinks that the relationship between Max and Eleven was one of the best female friendships that the character had on the screen. She believes that the timing is really sad for her.

Sadie said, “I like to think it was one of the first female friendships that Max has ever really had. Yeah! I think what was so wonderful about Max and Eleven’s relationship from Season 3 is that Eleven is obviously unlike most girls that you see. Max is also unlike a lot of girls that you see, so they kind of found each other and they just worked well together.

Till the 4th season, Max has formed a strong bond with her fellow other characters. This included a romance with Lucas and also a relationship full of ups and downs with her brother whose name is Billy. In the third season of the Stranger Things, Max formed a very close friendship with Eleven as she became more adjusted to the regular habits of a teenage girl in the ’80s.

In the third season, the two friends were good friends but in the 4th season, their ways seemed very apart from each other. In the current ongoing season of the series, both the characters are going through separate adventures in their lives.  Max is now discovering her connection with the demon Vecna and on the other hand, EL is struggling with the bullies in her town.

In the current season, Max has a major role to play in Stranger things season 4. She is expected to be a major part of the gang in the battle against the Demon Vecna. Sink also said that she doesn’t want to know how season 5 will end. The actress wants this to be a surprise which must be revealed to her when she will read out the script.