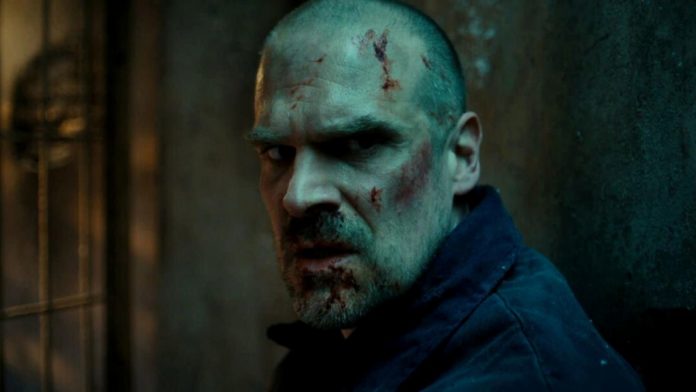 “‘Where’d that sword come from?!’ Yeah, I thought so too.” A thread of confused tweets was trending on Twitter about Hopper using a straight-up sword to fight a Demogorgon in episode nine of Stranger things. And one of its loyal viewers shared an explanation about the mysterious weapon appearing suddenly.

The show is one of the popular series on Netflix with a huge fan base including fans from science fiction and horror lovers. And season 4 was filled with everything from different plot twists to emotional dramas. But the scene that sticks out from others was of Hopper battling with a Demogorgon. The viewers highlighted the sudden appearance of the sword out of nowhere that Hopper picked up to combat the evil.

The good news is that some loyal viewers have solved this mystery. They found out where that sword came from.

“No, but can we talk about how this sword-like randomly spawned for hopper like at the start of a boss battle #StrangerThings,” one of the viewers tweeted.

And to this, another fan replied with an explanation that they saw it in episode seven. “Then I remembered, in episode seven the prisoners had to fight a Demogorgon, and they ran to get weapons. Went back and looked, and there it is,” wrote a fan.

Another wrote that later they noted that we see Enzo open a weapons locker in Episode 7, which includes the sword.

A fan also figured out that the sword is literally “the Atlantean” from the Conan movies starring Arnold Schwarzenegger.

And it turns out that this fan was right indeed. David Harbour, playing the role of Hopper, confirmed the same in an interview, saying that the sword he picked up was the actual prop weapon used in Conan the Barbarian. It is the sword that Arnold swings in the movie.

He also shared similar details about the weapon’s origin on Instagram. He wrote that the prop sword he used is the Atlantean sword from the Conan Films as pointed out by one of the lovely fans. The fan found it out in episode seven when it was used by an unlucky inmate who died near the cells at the side of the gladiatorial pit.

He added that it was heavy as hell and a tremendous honor to wield, stating that it was the same one used by Arnold Schwarzenegger, which is a moment of honor for him.

This is how the fans solved this mystery of the sword.

After the premiere of season 4, the makers are ready to film season 5 which will be the final season of stranger things. And this season will be 2.5 hours long with an ending that satisfies the viewers, said the Duffer brothers. However, Matt said they could not satisfy everyone, but they want an ending that feels right for this story. Season 5 is expected to premiere in mid-2024. This popular series is available on Netflix.