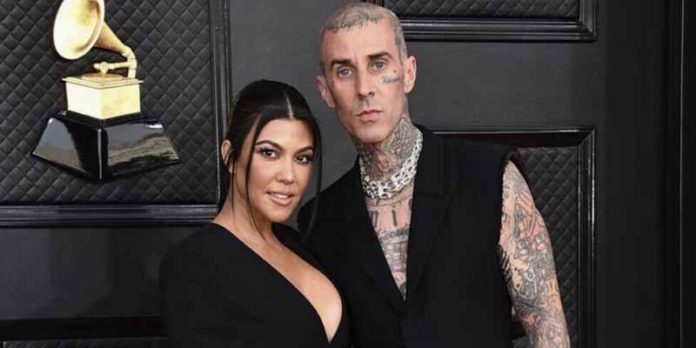 The Kardashian-Jenner sisters and ‘momager’ Kris Jenner, along with other famous people like Machine Gun Kelly, Megan Fox, and many others, attended the extravagant wedding. After the ceremony at her Italian wedding ceremony, Kourtney Kardashian took to Instagram to share photos of her stunning and romantic honeymoon with her husband.

The fashion designer has changed her name in her Instagram bio. The 43-year-old has added the word “Barker” to her name on the social network. However, it’s not been confirmed whether Kourtney has actually included Barker as a name.

Kourtney To Change Her Name On Instagram To Kourtney Kardashian Barker

Travis Barker and Kourtney Kardashian were first married on the 3rd of April 2022 in the MGM Grand Arena in Las Vegas. The ceremony was private and was held around 1.30 a.m. at the end of the night. They arrived at the One Love Wedding Chapel with the security of their own and a photographer as they did not wish to allow anyone access to the venue.

Kourtney posted on Instagram two days following the secret wedding to share glimpses of the wonderful moments of an intimate wedding ceremony. When she did so, she admitted that the couple didn’t have a marriage license and described their wedding as a “practice ceremony.”

It was followed by their wedding in the courtroom on May 15, Los Angeles. Kourtney and Travis each took on social media to post several photos that carried the caption “Till we die, end.” After that, the couple held a lavish wedding in Italy with close family and friends. According to several sources, the couple is also expected to celebrate their wedding on the outskirts of Los Angeles.

According to Vogue, The bride’s team worked together with Dolce & Gabbana to design her wedding veil of fantasy, which took inspiration from Barker’s famous Virgin Mary tattoo. The words “family love and respect” were stitched in the white thread just beneath the image of the Virgin Mary in a way that echoes the tattoo of Travis Barker. “Designing my wedding attire in collaboration with Domenico and Stefano was an amazing experience,” Kourtney said of her wedding veil.

How Long Kourtney Kardashian And Scott Disick Were In Relationship

From 2006 to 2015, Kardashian was in an on-and-off relationship in relationship with Scott Disick. They first met at a home event hosted by a mutual friend Joe Francis in Mexico. Kardashian and Disick are parents to three kids: Mason Dash Disick, Penelope Scotland Disick, and Reign Aston Disick.

At the beginning of 2010, the couple relocated from Miami with their child and Kim Kardashian’s daughter. At the time, Kardashian suspected Disick of having an alcohol-related problem. Disick and Kardashian came back together and resumed their relationship in the middle of 2010 after regularly attending treatment and, for a brief time, abstaining from alcohol.

Disick purchased an engagement ring and planned the proposal for Kardashian during a dinner supper on the rooftop of New York City during the finale of the debut season of Kourtney as well as Kim Kourtney and Kim Take New York in 2011. When Disick approached Kardashian regarding the wedding, she stated, “If things are so beautiful now…why do we need to change that?” In the end, Disick did not propose.

From 2016 until the year 2020, Kardashian engaged in an on-again, off-again relationship in a relationship with the model Younes Bendjima. Kardashian and her children were baptized in the Armenian Apostolic ceremony in the Etchmiadzin Cathedral in Vagharshapat, Armenia, in October of 2019. Kardashian received an Armenian name Gayane during the wedding.

In October of 2020, Kardashian tweeted comments and tweeted messages that praised Armenia as well as Artsakh in the Nagorno-Karabakh war. Kardashian’s romantic relationship with musician Travis Barker was announced in January 2021.